To share your memory on the wall of Esther Seiders, sign in using one of the following options:

To send flowers to the family or plant a tree in memory of Esther L. Seiders, please visit our Heartfelt Sympathies Store.

Receive notifications about information and event scheduling for Esther

We encourage you to share your most beloved memories of Esther here, so that the family and other loved ones can always see it. You can upload cherished photographs, or share your favorite stories, and can even comment on those shared by others.

Posted Feb 25, 2019 at 12:25pm
Our thoughts and prayers are with you all in your time of loss. Love, Johnny, Allison, Ainsley and Sutton

Posted Feb 21, 2019 at 08:08pm
I was sad to hear about Aunt Esther's passing.
My condolences to Gary, Tina and the families.
Aunt Esther always had time to talk and always had a smile and a laugh for me when Id stop on my way back to VA after visiting Mom & Dad.
A high point in my life and something Ill remember forever is when she hosted the Kerlin reunion and I won the twist contest. I was 5 or 6.
Rest in peace Aunt Esther. You will be missed.
Love, Kathy (Kerlin) Wetzel
Comment Share
Share via: 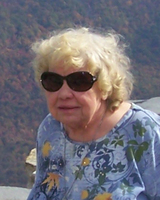