To share your memory on the wall of Roger Riley, sign in using one of the following options:

To send flowers to the family or plant a tree in memory of Roger A. Riley, please visit our Heartfelt Sympathies Store.

Receive notifications about information and event scheduling for Roger

There are no events scheduled. You can still show your support by sending flowers directly to the family, or planting a memorial tree in memory of Roger A. Riley.
Visit the Heartfelt Sympathies Store

We encourage you to share your most beloved memories of Roger here, so that the family and other loved ones can always see it. You can upload cherished photographs, or share your favorite stories, and can even comment on those shared by others.

Posted May 08, 2020 at 08:50pm
Sending our condolences to the Riley Family. I met Roger when he was station at Wright Patterson afb in Dayton Ohio, he and my husband we’re good friends. When Roger was around you he made you feel at home always I remember when he would come over to visit, he would dance with our Daughter have her flipping doing splits. Roger we have great memories with you my friend rest until we meet again
Comment Share
Share via:
VS

Posted Apr 17, 2020 at 04:43pm
Rodger was one of the nicest people I have had the pleasure of knowing. Always would give big hug and kiss. He always asked about my sons and grandsons. We have lost a very special friend and God has received a wonderful new angel. Will miss you my friend. Vicky Souders
Comment Share
Share via:
MB

Posted Apr 17, 2020 at 10:05am
Roger, I will miss your smile, your easy laughter, your hugs, always your happiness, and your kind words. My heart broke when I heard you passed, but you are home now and some day I'll be able to see you again. Thank you for sharing your wonderful life with mine.
Comment Share
Share via:

Posted Apr 16, 2020 at 06:44pm
Roger, I will miss your welcoming smile, and your hearty laughs. All the years we spent together at D. L. Martin together are among the fondest memories of my life! I will miss you, brother, but trust we will see each other again someday!!!
Comment Share
Share via: 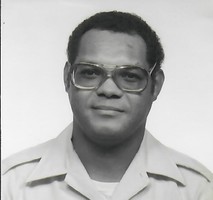